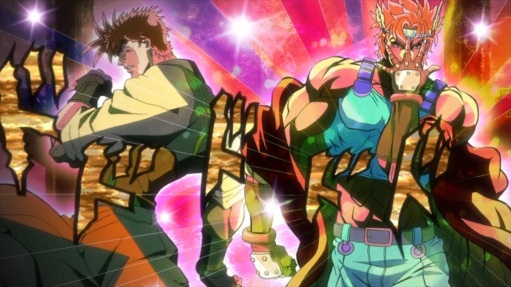 This show has: “I’ll be in support of Daft Censorship”

So Animazement is this weekend, which is where Dustin is going to make his trek once again and needs to put something out this month. So, it’s time for our hosts to combine their Hamon powers into one, by letting this podcast take it’s rightful STAND in reviewing Jojo’s Bizarre Adventure: Battle Tendency.

(0:00 – 1:18:20) Review: Jojo’s Bizarre Adventure: Battle Tendency – Since its been a few years since we reviewed Phantom Blood, this podcast is able to combine four entities into reviewing Jojo’s once more. But, in a twist of foreseen fate, our guest Daft was a Troll Pillar Man the whole time!! How will Dustin, Jonn and Josh combat this despicable fiend? By basically letting him do whatever he wants to the show.

In all seriousness, Jojo’s ended on Toonami, so the four hosts came together to talk about it. Actually, it was mostly a critique off a Toonzone thread of some mod bashing the show, so there was a lot to say on that. There is also discussions on Chris Chan mummified shirt being discovered, Nazisploitation films, Josh and his experiences with anime clubs, how Mega 64 paid homage to our podcast, 4D theme park rides, and how Disneyland employees handle guests suicide.

(1:18:20 – 1:48:00) Closing Remarks – This gets the hosts talking about if our world will be going to World War 3 again, Jonn buying the new Zelda game, SNES Mini discussion, the History of Buy-Rite Video Games, anime releases coming out soon like Record of Lodoss War and titles from Discotek, and much more.

I mean, its about on point…

Also known as: ” I’m waiting till we get to our 10th podcast arc, that’s when things really pick up…”

GUYS WE MADE IT!!!! With the start of 2014, we are still together, have not changed the name, and have to much to review for you that will eventually come out!! I say unedited on the title because… I am not gonna worry about editing a thing on here. So, whatever audio issues you hear in this episode, is the result of me not caring how it sounds for the first time in a long while, only because I have done recordings/edits for other podcast that will soon come out after this, so deal with it. Any who, we kick off the new year by having our later Christmas and 1 Year Anniversary special by talking about what we got for Christmas, movie talk and all around general discussion. We also have our bro Andy from the Daily Anime Podcast join in on the fun.

We kick off the episode where we discuss the yule tide cheer we received this past Christmas, which was mostly video games and anime related stuff. Also, we talk about movies that we have seen in the past few months. We continue the trend to talk about the latest Hobbit 2 movie that came out, and how Disney was able to make our hearts Frozen. I also mention the films I’ve seen in the past few months such as Homefront, Thor 2, Enders Game, Escape Plan, Machete Kills and Man of Steel. Of course, we mention other films like The Man with the Iron Fists, Hobo With a Shotgun and probably a few others (I forgot to mention that I saw The Secret Life of Walter Mitty also, good film).

This also gets us into talking about Zeonic dating life, Vic FiletMignonanona, other podcasters out there (well, mostly us trying to figure out the science behind Anime World Order), the enigmatic psyche of one Daryl Surat, general anime talk this past year, white people trying to be black for black people, and a whole lot of other crap mixed in there.

ED – In a few years, this might be my sad pathetic Christmas song…

Just like the man, this magazine will be an enigma…

Listen. I am 33 & never kissed a girl BUT I SHALL PREVAIL. No drugs, hookers or rape-u RT @Tsukai_Hikushi: DarylSurat what the fuck man haha