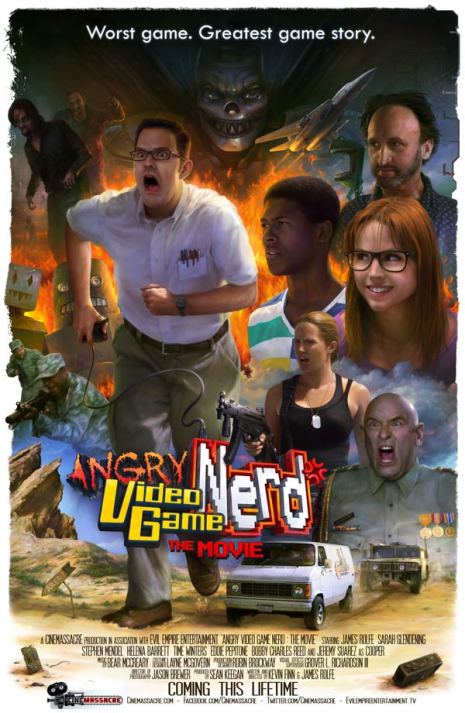 It has been a long while since the Holy AoY Podcast Trinity were able to come together and review a movie and a show in one episode (actually this might be THE ONLY TIME EVER!) We are once united with our overly quiet podcast co-host Josh, as we get to discuss the most recent Angry Video Game Nerd: The Movie being released online, and give our feedback on the moral misgivings of dumbass internet forum debates about Black Lagoon.

(0:00 – 49:27) – A Non-Anime Movie Review: The Angry Video Game Nerd: The Movie: The trinity was needed to discuss the lifetime project of James Rolfe and his angry endeavors of reviewing old video games on the internet, which then lead him to achieve the ultimate goal of turning all that hard work into a movie, which is a lot of hard work. So, like everyone else on the internet, we wanted to give our say on his hard work over the past few years. Of course before we get into any of that, we decide to rant about water issues in the West, the deep rooted forum stupidity behind Toonzone.net (aka, Zeonic becoming a Class A Cyber Criminal one lame post at a time), which then leads us to talking about the film. We decided to approach the film with us talking about the parts we liked (aka some Spoilers you know), and really reviewing the character of The Nerd and his evolution throughout the years on the internet. We also discuss how we first got into The Nerd, which in turn gets us into our roots a little on how we got to know each other online. Dare I say a podcast origins episode might turn up one day? Well, you’ll just have to wait and see about that.

(49:27 – 52:30) Podcast Promos: With Alpha Counter making the funding goal on their Indiegogo page, we figure we owe it to them to play a promo for them. Dave and Joel seem to be releasing more episodes recently than they have in the past few months; because with JoJo’s and Destiny out in force, they are there too get on that beat. Speaking of releases, The Daily Anime Podcast decided to recently release their review of the To Terra movie, which was just Jeff talking about the film for 20 odd minutes, since I know he read the manga for a while.

(52:30 – 1:45:34) The Toonzone Debacle: Black Lagoon Review: Due to the dismay of one particular internet forums opinions (keep reading past the post on the link if you dare), we unite the trinity once more to discuss the recent end of the airing of Black Lagoon on Toonami. Our opinions are mixed on this show, as Zeonic believes that it might be the greatest show to air on Toonami in its entire history, and believes anyone who opposes that idea is a “pansy female reproductive organ.”Jonn on the other hand is not all in alignment to Zeonic Toonami prophetic enlightened views, and Josh just cares about how many BEEPS the show got on TV. We decide to not spoil too much on the show itself; and use the flames of war, cast by a Toonzone Mod unbeliever, to discuss the human, psychological and moral viewpoints of the world in Black Lagoon. Maybe we are giving this show too much credit, but then again, maybe not enough (only because deep down, Zeonic believes Black Lagoon is the best modern day anime equivalent to a 1990’s Manga UK dub.) Care to weigh in your opinion listeners? This also ends with us discussing Zeonic panel plans for BanzaiCon, how we successfully trolled ToonRadio, and much more.

Convention Note: If anyone is going to BanzaiCon in a couple of weeks, you have a chance to see Zeonic continue to spew his anime nerd knowledge upon the masses of Naruto headband wearing, Hetalia flag waving, Titan slaying anime nerds that will be present. On Saturday from 6 to 7pm, Zeonic will show his Robot Anime Openings of the 1980’s; which will showcase openings to mecha anime, and even some that made it to the states. Then on Saturday from Midnight to 2am is the cream de la cream to what all panels want to aspire to be, and that is the “WHAT THE HECK?” MOMENTS IN ANIME: THREE TIMES THE MISCHARMED!! It is essentially the closest thing BanzaiCon has to an Anime Hell at this point, and people must know THE TRUTH behind what anime is really about.

OP 2 – Get ready to get drawn into the underworld…

ED 2 – What I imagine is on Revy playlist next to the M.D. Geist OST…

“The graphics are so good, you’ll commit SEGACIDE!!”

Now, just imagine everything you heard, were beeps. And that’s this show guys…

The day has finally come, where we make our 50th Podcast episode. And what better way than to do a recorded interview with a video game voice actress like Lisle Wilkerson. You wanna know something else, this was recorded 3 months ago at the end of May, and we still have a back log of recordings. At least it shows that we will not run out of content anytime soon…

(0:00 – 59:06) Interview: Lisle Wilkerson – We are humbly joined by the voice talent behind the recent voices of Christie Monteiro and Sarah Bryant in the most recent games of Tekken and Virtua Fighter (oh yea, don’t forget about Shenmue 2 now). Of course, to anyone who plays those games, it’s hard to focus on the voice behind the 3D model that is countering your attack for the tenth time in a ranked match (remember Joy in Shenmue 2? Yea, DON’T FORGET ABOUT SHENMUE 2). We of course ask Ms. Wilkerson questions on how she was able to get her foot into the door of video game voice acting, what is the voice acting world like currently,  what it was like growing up in Japan, working with Bill Murray in Lost in Translation, chatting about her works in video games (like Crazy Taxi and OF COURSE SHENMUE 2!!), being in fixed boxing matches, the current life of Calf., her upcoming (really past) con schedule for this year, and old school anime talk. All this and more in this episode…

The terms Lisle used in this interview for the Japanese language inclined:
Hafu (ハーフ)
Kikokushijo  (帰国子女)

Anime titles that are fond of Lisle and that we even mentioned to her:
Candy Candy
Attack Number 1
Aim for the Ace
Doreamon
Hello Kitty
Gunbuster
Space Adventure Cobra
Ashita no Joe 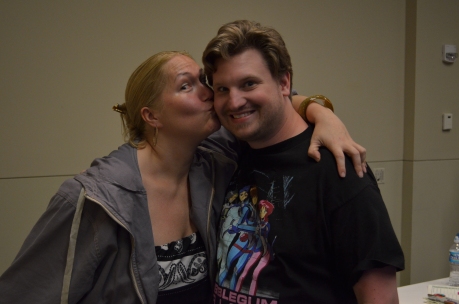