Also known as: “All gay people are Cylons!!”
And also: “They couldn’t get any real Muslims, they had to do CGI ones?”

So its been about November since we reviewed any older anime, and it’s high time we bring that back to the listeners. This time, both hosts Dustin and Jonn hop aboard the Kamiya and set sail on a wild adventure with our favorite womanizing space explorer, in Space Adventure Cobra: The Movie.

(0:00 – 55:58) Review: Space Adventure Cobra: The Movie – This is a film both Dustin and Jonn have been looking at for a couple of years now to review, and now both host have finally set their eyes towards the galaxy of high anime adventure. This Cobra film was a blast from start to finish, and it never stopped anywhere for a second to slow down. Cobra wants to tell you a story and fully expects you to strap in and hold on from start to finish, all the while having a blast in the process. This is full of babes, guns, space, ice planets and people who CANT MAKE THAT SHOT! Both host go into the film from start to finish, but that shouldn’t sway your opinion to not watch this thing. There were some off-topic stops during the review about Dustin watching Space Pirate Captain Harlock on Hulu, Hulu vs. Netflix, CPF talks about the dubbing on Harlock, our co-host Josh and his snoring issues, discussing Cobra TV, manga and the movie, people who are terrible fansub groups, nipples in anime, MSNBC vs. ani-twitter and more.

(36:08 – 38:30) Podcast Promo’s – It’s been a while since the last time we added podcast promo’s, so we should again give credit where credit is due. Anime World Order has been on the podcast beat for 10 years now, and they decided to spend their episode talking about shows from last year, and a promise of a high speed drifting review coming next… maybe. Jeff from the Daily Anime Podcast last spent his episode talking to his girlfriend/aka Love Plus waifu jailbait. Seriously, Jeff don’t do that again, but you at least explained why you did it, but no more…. EVER AGAIN! Fast Karate came back to talk about games, and make fun of Edgar from 24, which made Dustin laugh the hardest at a Fast Karate episode for the first time in a couple of years. They also lasted 10 years, but that was months ago, so let’s move on.

(55:58 – 1:31:53) Closing Remarks – The review conversation naturally transitions into discussing people who can’t figure out voice actors, Dustin gives advice on how to make his girlfriend Dori into a Gundam fan, failed promoters for our podcast, Dustin turned 30 (i.e. his “otaku expiration date” has come and must be renewed) and celebrated the occasion by watching Logan’s Run, 70’s science fiction movies talk, we say RIP to Lemmy Kilmister, David Bowie, Alan Rickman and Glenn Frey, America and their “Fast and Furious” goof on El Chapo, Chris Chan news, people who are white knights for Chris at places that Dustin knew in Raleigh, and comic book store bathroom troubles. All this an much more in this weeks episode.

OP – In a podcast review not too far, far away…

That is some thick shag carpet right there… 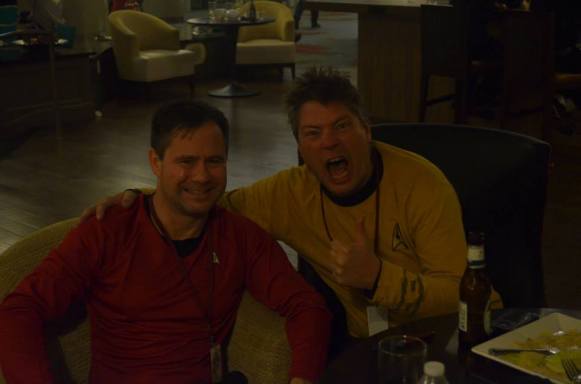