AoY Podcast #126 – Outlaws vs. Cowboys: The Bebop Stars of Space

Also known as: “The Beau Billingslea Power Hour on Toonami!”

We talk about the two biggest titans in the galaxay among anime fans in the early 2000’s, where we review Outlaw Star and Cowboy Bebop!

(0:00 – 45:40) Review: Outlaw Star – This podcast episode is the historic record of the pinnacle of what was important to anime fans on Cartoon Network starting from 2001 and beyond. Outlaw Star was a big anime among the viewers of Toonami, and Dustin heard about this show for years until he finally saw the series shown on Toonami recently for the first time. Both hosts Jonn and Dustin and special guest Daft chime in to talk about the overview of the series with some spoilers thrown in. This also includes how its vital importance that Jonn dad tells Jonn in the call that the dog is eating cheese off the floor, the stupidity of Transformers cartoons, Outlaw Star merch in America, FLCL revival talks, will Hamtaro be on Toonami for Aprils Fools Night? (as of this writing, Adult Swim showed FLCL Alternative subtitled on TV, followed by Mind Game, and a bunch of the regular block airing in the same format, because I’m writing this about 1am on April Fools night – Dustin), Toonami censorship on TV and much more.

(45:40 – 1:39:00) Review: Cowboy Bebop – This episode marks the 20th anniversary since the anime first aired on TV Tokyo, and how it later showed up that late summer on the new Adult Swim block on Cartoon Network in 2001. Both hosts recant how much of an impact Bebop has had on them as anime fans all these years later, including the merch that’s out there (you can find the pdf of the Bebop Anime Guides here at my blog – Dustin). This goes into account what particular episode got Dustin involved in Bebop, our top 3 Bebop episodes, the TV edits, and a whole lot more!

(1:39:00 – 3:05:30) Closing Remarks – This is chock full of material that covers for the month of March since we last recorded, including how Love that Goku got social services on his butt, Linkara leaving TGWTG and the twitter thread full of the company drama, Meson in dire need, the fully funded Kickstarter for Gunsmith Cats, The Toys That Made Us Netflix Documentary series, Dustin con talks on Toylanta and SC Comic Con, RIP Toys R Us/southern food stores/Return of KB Toys, the Mystery of Miami Mike finally solved by The Anime Nostalgia Podcast and the stupid weeaboo drama that follows on the ANN Forums, Dustin mentions his thoughts on Pacific Rim 2, and much more!

OP – The Outlaws of the Galaxy…

Zinger – What Miami Mike does these days…

We finally know the truth behind Miami Mike…

Customers waiting for Greenville Toys R Us to open. Looking for answers about liquidation sale being postponed @foxcarolinanews pic.twitter.com/ZPIMNBwMUg

Throw that worthless queen away… 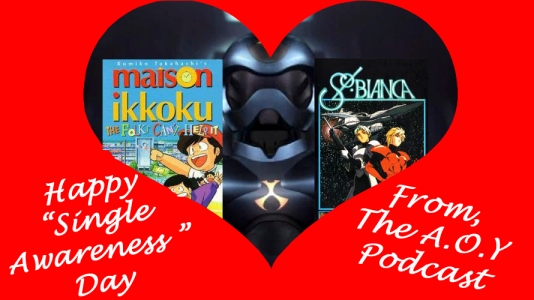