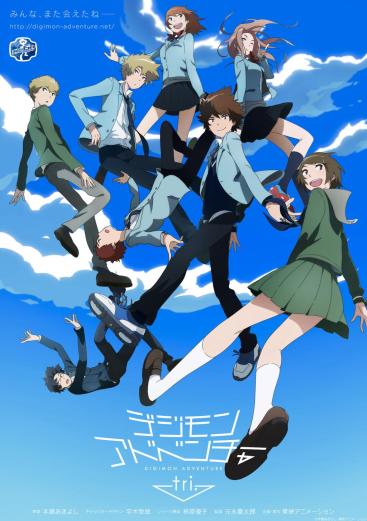 Also known as: “Whats a guy like me gotta do to get some sex in his life?”

For this week, we got a handful of people on to talk about the latest Digimon series. Dustin was absent from this episode (and this was recorded the night before our Star Wars review), but Jonn and returning guests Daft, Josh and Cloud spent their evening on the show to talk about Digimon Adventure Tri.

There is no need to bother with time codes in this episode, since it seems to be less about Digimon and more about the hosts ranting on every other nerdy fandom out there. If you want to experience total levels of nerdom from something out of Evan Dorkin’s The Eltingville Club “comic book realm of geekdom,” then this is your sanctum. Aside from discussing Digimon, the gang go into their abyss of opinions about the fall of 4Kids, comic book series and movies, people in the anime industry that would be in our old AIM chat rooms years ago (and how they were treated by some), Nickalodeon vs Cartoon Network scheduling wars, anime companies, people on the internet we know, Precure talk and so much more. There might be some audio issues certain sentences cutting out, and that is due to some glitches on audacity part, oh well. Originally this skype call went on for like 6 hours, but Jonn recorded up to 3 and I will use that later part on another recording down the road, so we’ll see.

OP – We Try and stay on topic, but we couldn’t…

ED – Part of your childhood that won’t come back…

Come on, you know this is what would happen if 4Kids got a hold of this show…