Also known as: “Vash The Redwood?”

Mission… Accepted! The Gundam 90’s era isn’t over for us yet, and we have reached the halfway point where we dive into a world of TOTAL PACIFISM!! I’m talking about that Mobile Report Gundam Wing. Gundam Wing seems to be the Gundam show that introduced today’s American anime fans into Gundam (I myself included.) Some of them will die by this series as being the best thing they have ever seen. Well, we happen to say some choice words about this show, and sorta SPOIL it as well (again, from what we can best remember). We also use those choice words on the sequel Endless Waltz, and briefly mention the side manga’s off this show before ending things.

I should note, Andy and Jeff from the Daily Anime Podcast made all the episode screw-ups possible (which made it not a boring podcast episode).

Next time, we will make a brief Turn Around into another Gundam show.

Mike Toole brings quality entertainment for Gundam Wing… (BTW, I DID NOT HAVE A CRUSH ON RELENA, SO I DID SORTA GOOD FOR THE MOST PART!)

What’s your level, of commitment? 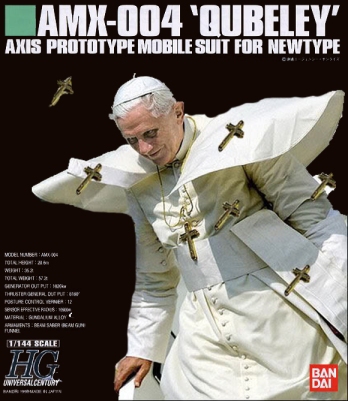 It gets burnt 3x as fast…

This entry was posted on 03/22/2013 by zeonicfreak. It was filed under Anime, Guests, Manga, Reviews and was tagged with Daily Anime Podcast, Endless Waltz, Gundam Wing, Mike Toole, Pope Benedict XVI, Ratzinger.