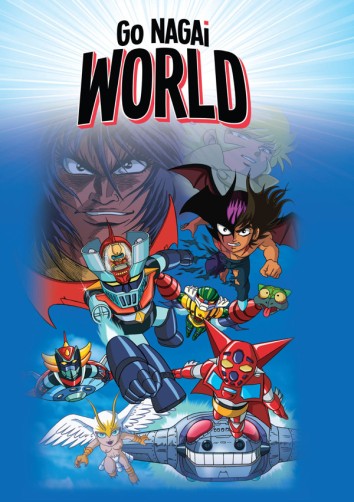 Also known as: “This podcast is a turtle… awkward turtle…”

It’s that time of the year again where the Devilman brings good tidings and fear to Halloween, and bad comedy (should mention that hardly no editing has been done, so well just roll with it again to get this out on time – Dustin). This year we review CB Character Go Nagai World.

(0:00 – 1:07:25) Halloween Review: Go Nagai World – In keeping up with our hallows-eve tradition with the Devilman himself, this time we are joined by the more notable characters of Go Nagai that Devilman and the gang get to meet. This is an anime for the true Go Nagai fans out there, like those who own Super Deformed Double Feature because they are big ARTMIC fans. In this review we also go off the beaten path with “Dick”sploitation movies, Jeb Bush and his Turtles, what Dustin went as for Halloween, other Go Nagai properties (mainly Violence Jack, because that’s all that matters), our ideas of a Violence Jack video game, and much more.

(1:07:25 – 1:38:19) Closing Remarks – This was surprisingly short since this past month has been full of top headline stories, namely like how Chris Chan and his “Sweetheart” broke up, Dustin and Jonn thoughts on the world of Blade Runner, Toon Radio wont live again, how whoring out for cash like the rest of those YouTubers ain’t our style (not yet at least), and much more.

I AM THE KING BABY!!